Welcome to week 3 and how the fuck are you Slab Bacon?  What an exciting ending to week 2 that was!  We had a couple nail-biters come down to Monday Night Football, we saw Josh Gordon go to the fucking Patriots, the Browns missed a PAT and blew another win, we even had our first trade of the season go down, and my personal favorite, we saw Vontae Davis of the Buffalo Bills retire at halftime.  I’ve always joked about players 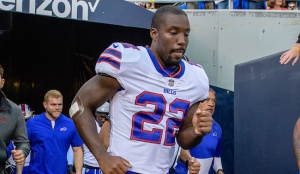 “I’m checking the fuck out of this bullshit…” – Vontae Davis

retiring in the middle of a game regarding fantasy productivity, but last week we saw a player actually do it for real.  So for that,  Vontae Davis, SBFFL salutes you.  Also, I just want to add that I fucked up in Week 1 of the power rankings.  I put in some incorrect data which fucked up Week 2’s power rankings as well so I went back and fixed it.  There’s no way of knowing what they would have been in Week 1 because the Roster scores for that week don’t exist anymore therefore it’s impossible to know where you were and if you moved up or down. Sorry about that. These are the real rankings going into week 3.  Here is your weekly write-up as we approach the final game of our first divisional series.  Good luck!

1t.) Oregon Trail Battlewagon (2-0) – The only team to top 100+ points in the first 2 weeks OTBW is off to a very strong start despite falling victim to the annual play of “Jared Cook does something early in the season only to never be seen again until week 12” .  Lead by Cousins, and the PIT offense of AB and Connor, they look to close the first divisional series at 3-0 when they face their fellow Oregon homie The Most Blounted, a team they swept last year.

1t.) South Main Mercs (2-0) – Extended their winning streak over the Pool Rats to 7 games, making them 7-4 lifetime over the division rivals and it remains the longest active

winning streak over any one team.  They gave up young running backs Chubb and Aaron Jones to The Most Blounted for Le’Veon Bell, a trade that can fall flat or boost this team considerably later in the season.  This week they will be the first fantasy team to start the Cleveland Browns defense since 1994 to keep the divisional wins going against Delanie Needs a Walker.

3.) Rex’s Revenge (1-1) – A silent killer, Rex quietly comes in at #3 having made exactly zero roster moves coming into week 3.  They took an L after a solid performance that just wasn’t enough to stop the Kirk Cousins Battlewagon and also made you want to punch Chris Carson and Andrew Luck in the God Damn testicles.  Rexy will end the division series by facing off with a red hot Four Loko Power Trip, a team Rex is 4-2 against lifetime H2H and averages 88.3 points vs. their 74.5 when facing each other.

4.) FAFHAM (2-0) – After another 40 TD game from Pat Mahomes and an uncomfortably close game on MNF, FAFHAM earned a win by 0.4 points over the Werd Dawgs to find themselves on top of the Canadian Bacon division at 2-0. Somehow they were able to do

all of this without Charles Clay. With Josh Gordon now in Foxborough and after spending a handful of FAAB on that sweet sweet Fitzmagical TB offense, maybe they won’t have to worry about Mahomes carrying the team.  This week they look to stay on top of the division and also take the lifetime H2H lead over Bangers and Thrash- currently tied at 3-3.

5.) Pool Rats (1-1) – powered by only Philip Rivers and the fumes of Saquon Barkley, Pool Rats fell to the Mercs after putting up an ugly 72.8 points.  I know it must be frustrating

to watch the Chargers put up 31 points against the Bills only to see Keenan Allen get 6.7 fucking points, but watching Breida and Clement go off on your bench has to be the real kick in the dick.  This week they’ll probably use that new life on their bench when they face J.J. Wattshappenin, a team they have not won against since 2015 (2-7).

6.) J.J. Wattshappenin’ (1-1) – the Delmore luck played into a Monday Night Miracle as he watched Allen Robinson on the opposing team break his personal record of

receptions and still managed to not see the endzone.  That along with a Trey Burton shovel pass TD, they squeaked by Delanie Needs a Walker by 1.4 god damn points.  Nobody in this league is fucking surprised in the slightest.  A battle with fellow 1-1 Pool Rats in Week 3.  The last two times they faced each other, the Pool Rats put up 69 points.  Gross.

7.) Four Loko Power Trip (1-1) – After a tough loss in week 1 with losing Fournette and Watson forgetting how to throw a football, Power Trip bounced back with an incredible win in week 2 over the Most Blounted.  This

was one of the biggest bounce backs of the week going from 68.9 points to 103.9- a 35 point improvement.  Watson, Melvin Gordon, and Diggs fucked shit up and they hope to torch the scoreboard and disregard all forms of fire safety against Rex’s Revenge in Week 3.  They have a perfect blueprint for Watson to get LIT this week when they face the Terrible Football Giants in his home opener.

8.) Bangers and Thrash (1-1) – The Maple Crown was handed over to Drop it like it’s Popp for the first time since 2015 after BnT fell to 1-1 with a Pickle Dick performance. After the lowest performance in SBFFL so far this season, they spared no expense and

dropped about 40% of their FAAB on Gio Bernard and John Brown with hopes of making an immediate impact against the Bud Light chugging 2-0 division rival FAFHAM.  The two teams split the series last year, but in the final game of the season Bangers crushed them 115.3 – 56.3

more than Pat Mahomes,  the monkey was taken off their back after 2 straight years of getting swept in the series.  After bouncing back a cool 26.9 points, they look to do something they’ve done easily the past 2 years, and that is crush the Werd Dawgs.  But this year the Werd Dawgs have outscored them in both weeks 1 and 2.

10.) Matt is Werd Dawgs (0-2) – these poor guys watched the scoreboard in terror on MNF as Jordan Howard of FAFHAM and their own Bears D/ST wind up in what would decide the closest game of the week.  This loss makes the Werd Dawgs 1-4 against

FAFHAM and now 0-2 in the division.  They have certainly been missing Freeman and Baldwin, and having them out will continue to fuck this team as they try to break two streaks this week.  They will look for their first win of the season and their first win ever against Drop it like it’s Popp (0-3).

11.) Delanie Needs a Walker (0-2) – totally got “Delmored” in a winnable game on MNF despite the total balls performances outside of Cam Newton and Christian McCaffrey.   IT

was right there, and Delmore fucked it all up. So far we’ve seen a huge regression in AP and Derrick Henry on a Titans team that seems to never want to use him for some stupid reason. Delanie Needs a Walker has a roster that has shown some potential but hasn’t had all the players perform on the same week.  They’ll look to take advantage of a #1 ranked Mercs team without Joe Mixon who they took a beating from last year 108.3 – 64.2.

12.) The Most Blounted (0-2) – Let’s congratulate the winner of the Fitzmagic Sweepstakes after a perfectly placed FAAB bid of $10 that won the 2018 Future MVP by exactly $1.  Before securing their franchise QB, they pawned off their broken down

Cadillac in exchange for some Rollerblades just to get some movement at the RB position.  This will be Aaron Jones first game of the season after being suspended so this is the perfect opportunity for him to breakout in the current dumpster fire that is the Green Bay RB stable.  Here’s to hoping Fitzmagic and Aaron Jones can carry this team to a David vs. Goliath victory over the Battlewagon. 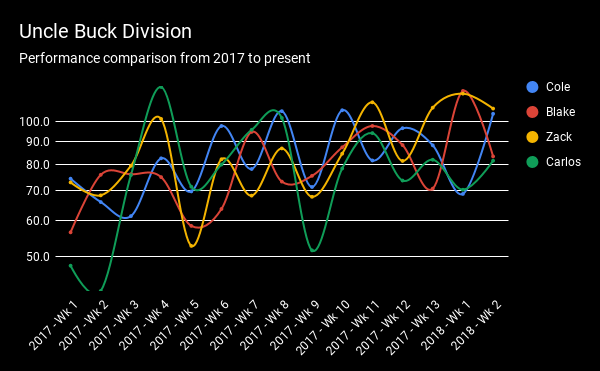 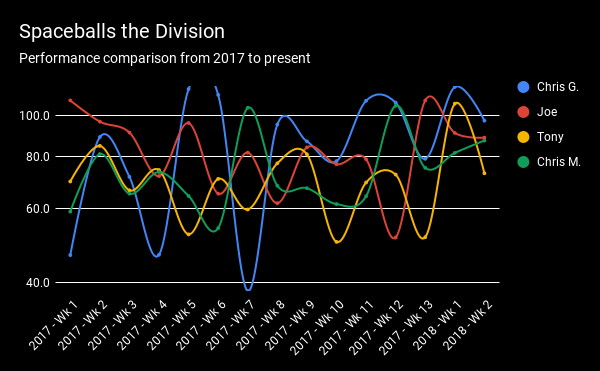 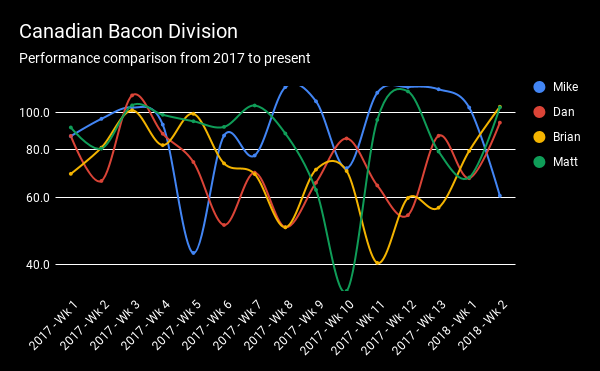